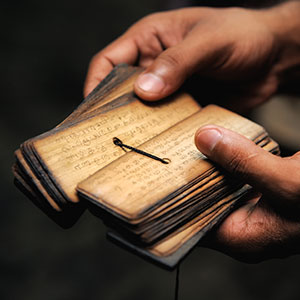 Ayurvedic medicine has a rich history. Originally shared as an oral tradition,     Ayurveda was recorded more than 5,000 years ago in Sanskrit, in the four sacred texts called the Vedas: the Rig Veda (3000-2500 BCE), Yajur Veda, Sam Veda, and Atharva Veda (1200-1000 BCE). This ancient health Science is considered at least 3000 years old. The word is a combination of two words: ayus (life) and veda (knowledge). This science has been laid on a strong foundation of philosophies and theories like tridosha so that even after 3000 years we can experience the same results as explained in classics in our present-day today life.

The Rishis and Munis of Indian society dedicated their entire lives to understanding the truth about the universe. They passed down their knowledge and practices to their students, with which the oral tradition continued on for thousands of years. They recorded their discoveries in the holy book of Vedas. One of the most prominent Rishi was Bharadwaja who lived around the time of 700 BCE.

Around 1500 B.C. the use of ayurveda increased for treating various diseases and it was divided into eight specific branches of medicine. In addition Atreya- the school of physicians and Dhanvantri- the school of surgeons originated. The Chinese, Tibetans, Greeks, Romans, Egyptians, Afghanistanis, and Persians came to India to learn ayurvedic principles of healing and treatment. Ayurvedic texts were translated in Arabic and these were used by physicians such as Avicenna and Razi Sempion, to establish Islamic medicine. Besides this, Ayurveda became popular in Europe as well and it formed the foundation of the European tradition in medicine. Paracelsus, the father of modem Western medicine (1600 AD) has also adopted from ayurveda (in the system of medicine that he practiced).

Designed and Developed by Websoul Techserve